It's a big, wide, wild, world out there. Get out there and start experiencing it!

“It’s straight up for a few hours, but once you’re up there it’s worth it.” That’s what we had to go by before we set off for Strathcona Park’s Marble Meadows, and we wouldn’t realize just how much truth was in those words until we hiked the trail for ourselves.

While Marble Meadows is lesser known and less talked about than some of Vancouver Island’s other hiking go-tos like the Juan de Fuca trail or Della Falls, we were assured that the meadows contain some of the most beautiful scenery the Island has to offer for those hikers that don’t mind a little challenge in getting there. That was enough to convince us, so off we went!

For this particular journey we roped Elliott’s younger sister Annora from Regina into the trip just to prove that a prairie person can indeed climb a mountain. Her plane arrived safely in Victoria despite warnings of extreme rainfall and an “atmospheric river” engulfing the coast, but our plans to head out hiking straight from the airport were put on hold. Instead, we took a gamble and hoped that the monsoon would rain itself out while we slept, and at 3 am the next morning found ourselves stumbling out of bed, pouring coffee into go-mugs, and shoving our packs into the car for the rainy drive up to Campbell River from Victoria.

The gamble paid off, and as we made our way into Strathcona Park along Buttle Lake, the sky turned from grey to blue and we were greeted with an absolutely beautiful day to start our trip. 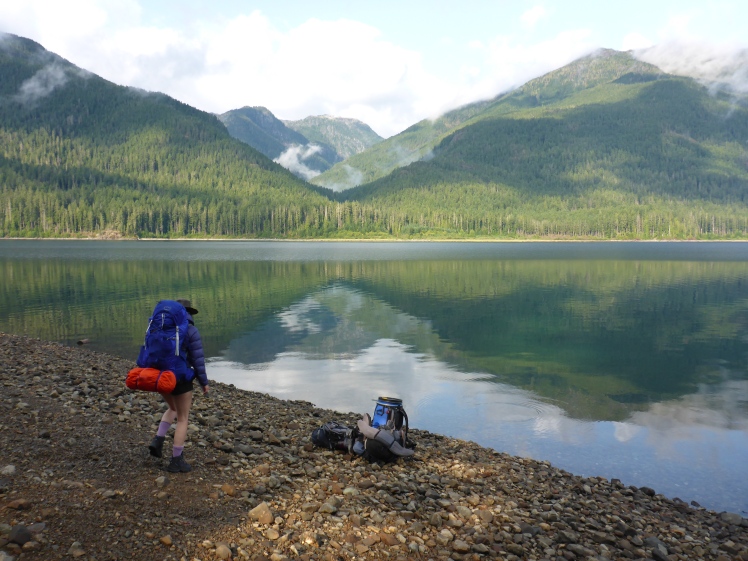 The fun thing about the trip to Marble Meadows is that it doesn’t start by hiking, but rather by boating! The road winds its way down the east shore of Buttle Lake, but the trail begins on the west side. There is no way across but by boat, and for that very reason we had brought our canoe along with us.

PFDs on, paddles in hand, and 3 backpacks and 3 people crammed into our 17′ Prospector for the trip across Buttle Lake- fun times! The winds on Buttle can pick up during midday, but early in the morning the lake was almost like glass and we were able to paddle across to Phillips Creek and the start of the Marble Meadows trail in less than ten minutes.

After the short paddle we donned our packs and headed off on the trail- 6.6km of up, up, and more up switchbacking its way up about 1250m of elevation from Buttle Lake to the alpine meadows and plateau above. 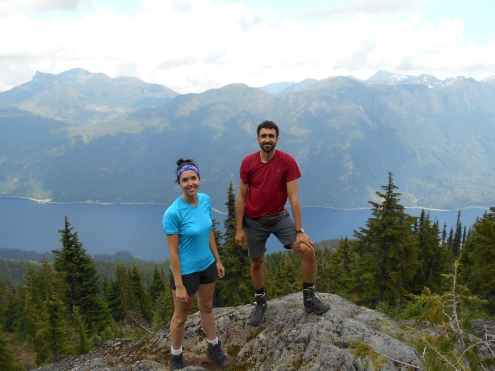 Finally, about six hours later with lots of breaks for 3 people who aren’t in the best shape they’ve ever been, we did the last switchback and crested onto Marble Meadows. A beautiful expanse of rock, ponds, lakes, grassy meadows, and low vegetation greeted us, framed by even larger mountains on all sides as far as the eye could see. It was a sight to behold, and as inviting as an alpine environment ever could be. 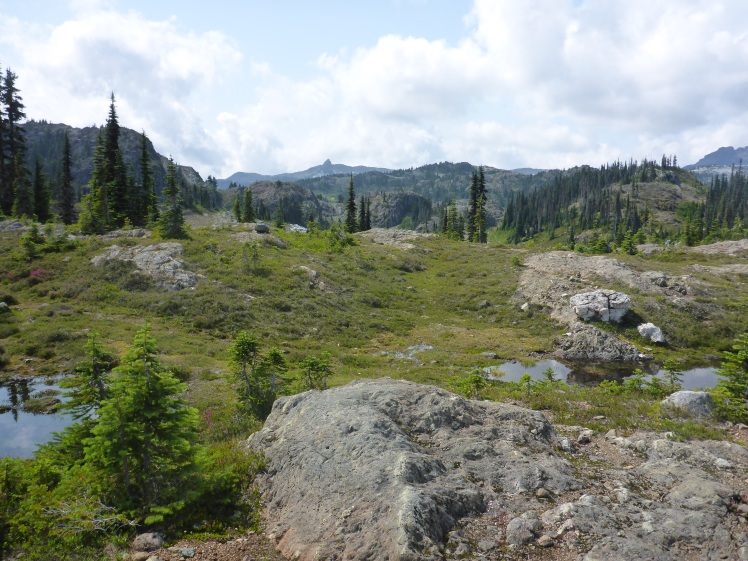 Once we were up, we stopped to set up camp at the first flat section tucked under a low rock wall and between two lakes. This area of Strathcona is out of the core camping area, so you can camp pretty well anywhere you want. We snagged one of the best spots, but there were still tons of places to camp for all of the other 10 or so hikers we saw during the rest of the weekend. We had a long nap, a tasty dinner, and headed to bed early after a long day. The mosquitoes were hungry too, it turns out, and helped themselves to dinner as well.

The next morning: breakfast with bannock, blister care, and a plan: we decided to keep camp where it was and head off with day bags to, well, anywhere! One of the best things about Marble Meadows is that it’s easy to see all around and navigate pretty well wherever you want on an ad-hoc basis, while informal trails can usually be found to get you where you want to go. 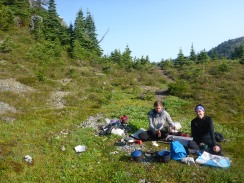 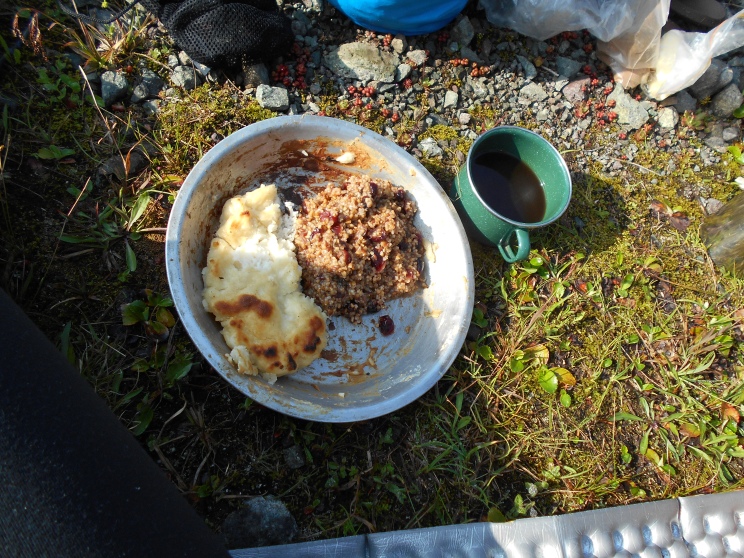 First stop of the day? Marble Peak! Although it loomed high above our campsite, it’s always amazing how fast humans can get up a mountain with a little determination and some good hiking boots. 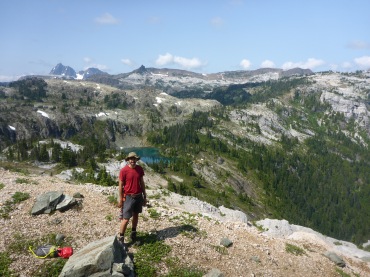 After not too long, we made it to the top of Marble Peak!

… or almost, at least. More accurately, we made it to what could be called a pre-peak. While Annora and Lisa enjoyed the views from the pre-peak, Elliott found a way around the main peak and climbed up a sketchy crack in the mountain, rocks coming out in his hands and tumbling down the mountain as he went, all to reach the actual peak! … or almost, at least, except there was another peak a little further off that was actually the real peak, but looked a bit out of his league for that day. 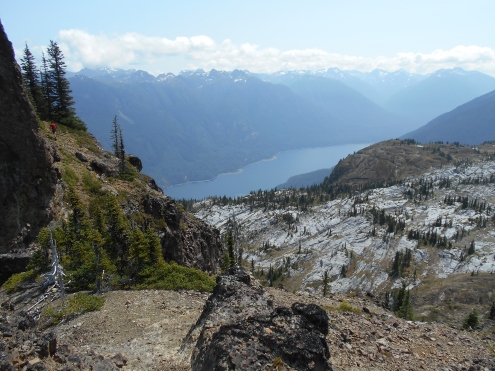 Elliott finding a way up Marble Peak with Buttle Lake down below.

Can you see him!? 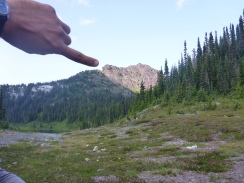 Marble Peak from camp. That’s where we were!

For the rest of the day we simply wandered around. More rough routes, more meadows, more mountains, and no shortage of fine views. 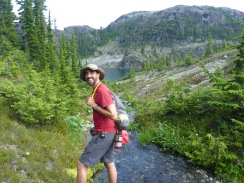 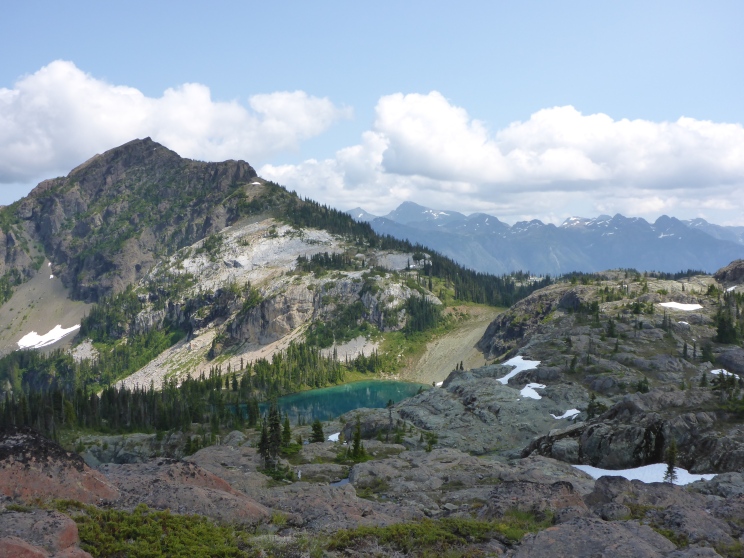 That evening we sat around camp playing cards and trying to kill as many mosquitoes as possible. There was no shortage of opportunities.

The following day was more of the same. More random wandering in search of great views, this time on the rise directly behind our camp. 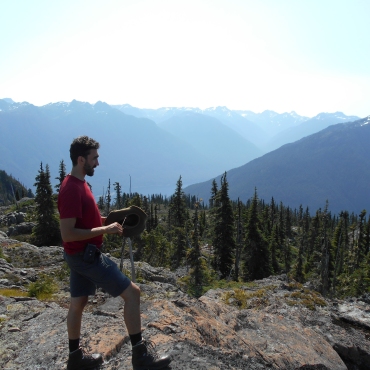 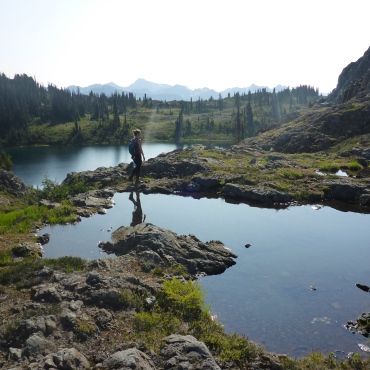 We made it up to the top of whatever it was together with our mosquito friends, and had beautiful views on a crystal clear morning with not even a breath of wind to disturb us, or to keep the mosquitoes at bay. 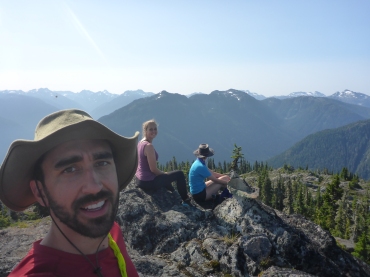 Three people, and at least as many mosquitoes on Elliott’s hat alone!

But what goes up must come down, and unfortunately we had to head back down from the beautiful Marble Meadows. Lisa said she could have stayed for at least a week, but there will be always time to visit again in the future and hike to some of the more distant peaks and plateaus. 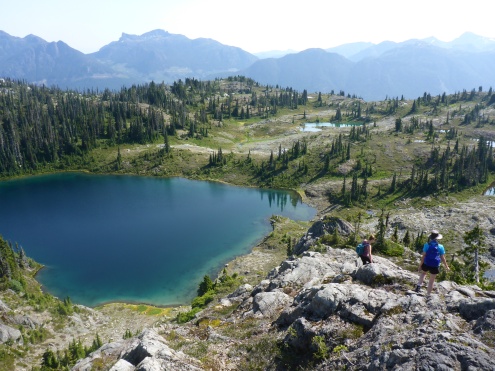 We made our way down from the meadows, and then entered the forest to take the switchbacks back down in reverse. Somehow it seemed even worse than when we came up, and we wondered how we had managed to come up over 1200m in the short space of 6.6km just a couple of days before.

Our feet were sore, our water bottles were empty, but eventually we made it back down to Buttle Lake where our canoe was still waiting for us. The winds were high and the waves threatening, so we decided to camp on the west side of the lake for the night down by the water, which turned into an unexpected beach day! 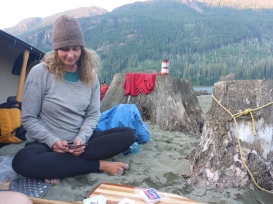 We set up camp right on the beach, soaked up the sun, shared a much needed bar of soap, and played cards until the sun sunk behind the mountains. The canoe propped up between two old tree stumps served as a fabulous wind break until the evening calmed down, and we went to bed with a long but satisfying day behind us.

The next morning we woke up early, had coffee and bannock, loaded the boat, and headed back across Buttle Lake for a calm, final leg of our journey.

In the end, our trek across Buttle Lake and up to Marble Meadows was simply fantastic, and one of the absolute best hiking trips we’ve done anywhere, and probably the best on Vancouver Island. The paddle adds a fun but easy element while keeping the trail free from the hordes that are found on other trails. The way up is tough, but winds its way through a couple of different types of forest and offers nice views over Buttle Lake for the second half. The meadows themselves are calm, beautiful, and inviting, and there are days and days worth of places to explore for eager backpackers. Although it isn’t a walk in the park, the bang for your buck is pretty high, and Marble Meadows is one of the first places we will head back to when we’re looking for a beautiful alpine hike with endless opportunities to explore.